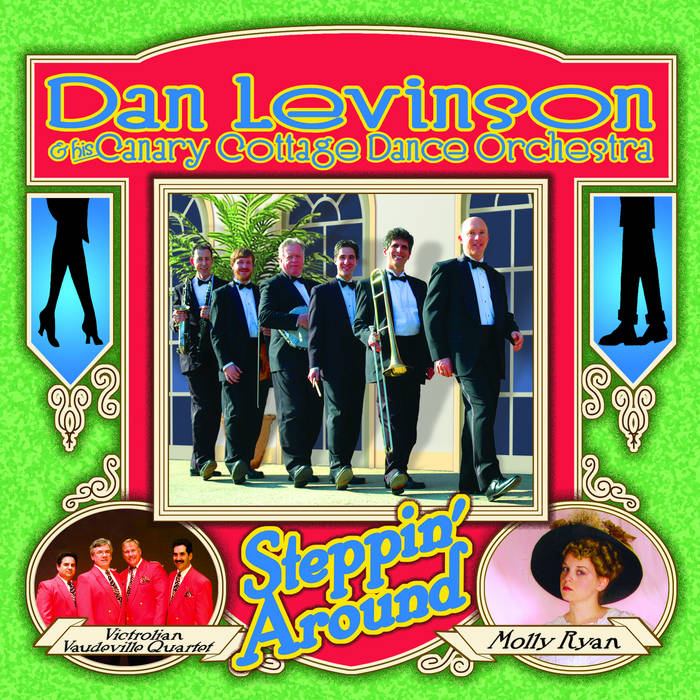 The world lost Scott Joplin in April of 1917, but just a few weeks earlier it heard the first "jazz" recordings. The music of Dan Levinson and his Canary Cottage Dance Orchestra is an infectious blend of ragtime and jazz, sometimes referred to as "rag-a-jazz." "Steppin' Around" is the successor to "Crinoline Days", released two years earlier. Dan Levinson and his Canary Cottage Dance Orchestra emulate the sound of a dance band that one might hear in a swanky music club - in 1917. Rather than being a re-creation, however, "Steppin' Around" features Dan Levinson's new arrangements of popular songs from the Golden Age of Tin Pan Alley, including spirited fox-trots, tender waltzes, brisk one-steps, and dreamy, sentimental ballads.

TRACKS:
1. Everybody Step - introducing "Say It with Music"
2. Mister Moon-Man, Turn Off the Light
3. California, Here I Come
4. I'll Be with You in Apple Blossom Time
5. Just a Cottage Small (By a Waterfall)
6. Tuck Me to Sleep in My Old 'Tucky Home - introducing "My Old Kentucky Home"
7. Bethena
8. Miami
9. Jeannine, I Dream of Lilac Time
10. Darling Nellie Gray
11. Wait Till the Sun Shines, Nellie - introducing "I Don't Care"
12. I'm Forever Blowing Bubbles
13. Wall Street Rag
14. Come Along My Mandy
15. When You Wore a Tulip and I Wore a Big Red Rose - introducing "Put On Your Old Grey Bonnet"
16. Meet Me Tonight in Dreamland
17. The Girl on the Magazine
18. America, I Love You
19. Till We Meet Again - introducing "Beautiful Ohio"
20. Jeanie with the Light Brown Hair
21. Let's You and I Just Say Goodbye

ALL INSTRUMENTAL AND VOCAL ARRANGEMENTS BY DAN LEVINSON